When Gunnedah mum Ashley Bender started petitioning for an all-inclusive playground in 2013, she had no idea the concept would get off the ground.

Visiting parks is stressful for Ashley, with fears for her children’s safety, particularly her seven-year-old son, Kyren Roberts, who was diagnosed with autism at the age of two.

Well, in December 2019, Ashley’s dream was realised with the opening of Livvi’s Place, at Wolseley Park, Gunnedah.  Where this is hope, anything is possible!!  And look at the smiles on everyone’s faces!

Kyren Roberts was grinning from ear-to-ear when his special seat in Livvi’s Place Inclusive Playground was ready for play!  Kyren’s Bench”, which is just inside the entrance to the new inclusive playground, was quickly put to good use as Kyren was quick to invite others to sit with him. 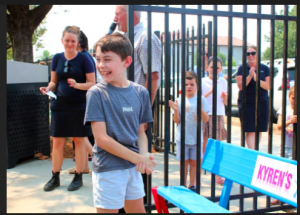 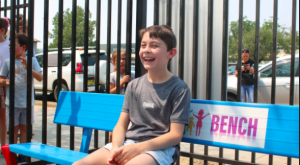 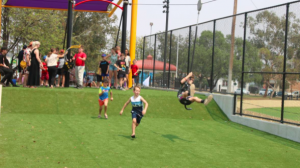 History in the making – here’s what transpired to bring a Livvi’s Place to the Gunnedah Community.

Pictured above – Gunnedah Shire Council’s Andrew Johns and mayor Jamie Chaffey with the concept plan for the all-inclusive playground at Wolseley Park.

The design was given the nod by Gunnedah Shire Council during an extraordinary council meeting. The concept plan was developed by Kathryn Yigman of Stewart Surveys following extensive consultation with the community and the Inclusive Playground Working Group.

Ashley and her mother, Jane, both viewed the design in late-July and said they were impressed.

“They have exceeded my expectations.”

Jane said the equipment proposed for the playground is “just outstanding”.

“It’s great for kids with special needs and disabilities because they’ll be able to play side-by-side with kids of all needs,” she said.

“It’s not just for the kids. It will be fabulous for tourism for Gunnedah,” she said.

“I’m extremely happy that they did decide to partner with Touched by Olivia because that was something we wanted to happen,” Ashley said.

For Ashley, the playground project represents more than just a play space.

“A part of this whole project initially was to show Kyren that he can achieve what anyone else can achieve,” she said.

“Nothing’s going to hold him back. He can reach for whatever he wants to.”

Ashley and Jane said they were thankful to the council’s community and social planner, Debra Hilton, and environment and planning services director, Andrew Johns, for their efforts in bringing the project to fruition.

The council successfully applied for extra funding from the Stronger Country Communities Program for the project, and thanks to their grant of $850,000, the opening of Livvi’s Place is being heralded as a truly historic moment for the Gunnedah community … [and] a wonderful addition to Gunnedah’s attractions for both local people and visitors.

Ms Hilton said Touched by Olivia had created a Facebook group  – Friends of Livvi’s Place Gunnedah – to enable the community to stay connected to the playspace and the families visiting.

“We need to demonstrate to those that are assessing our grant application that this project is much-loved and needed in the community,” Ms Hilton said.