The NYC marathon takes participants through the five boroughs with a slight detour through the little known districts of Heartache, Determination, Inspiration and Elation.

At the beginning of 2016, Touched by Olivia decided we would like to take part in the world’s greatest race. It would commemorate our tenth anniversary, and be a great way to reconnect with our local community. The call went out and we were delighted when 30 runners signed up. It’s been fantastic – lots of group runs, fundraising events and training sessions.

On November 6th, New York closes car access to her streets and invites 50,000 runners to take part in one of the most iconic marathons in the world.

The fun started at 6am when we boarded coaches to Staten Island. Our crew set up camp and stood out, with runners from all over the world requesting pictures with us. A highlight was being interviewed on ABC News (many of the spectators recognised our shirts later on in the race!) Click Lee’s microphone below to watch. 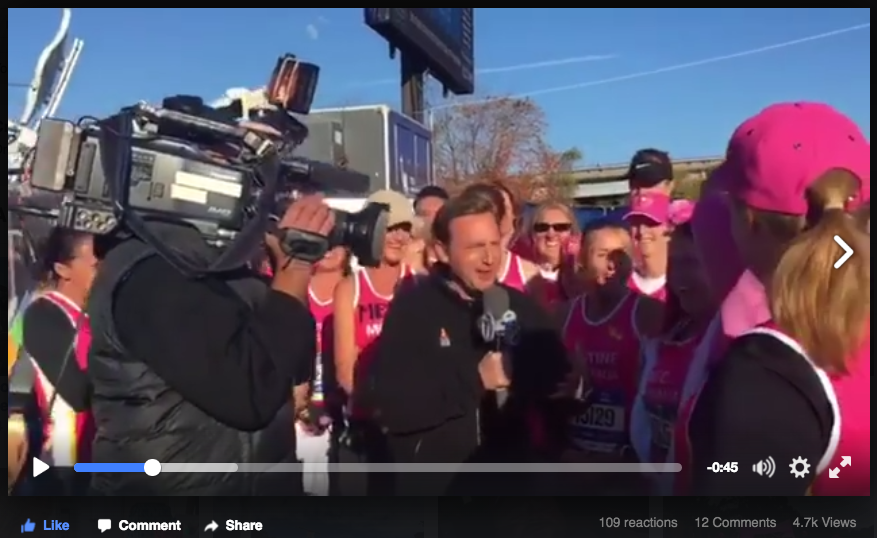 There were five bridges to cross, but coming off the first was something special. New Yorkers were out in force. Signs, water, and words of encouragement extended from 9am when the elite runners started to in the dark of the night. Our hot pink singlets again attracted lots of attention and words of support, including the popular “You got this!”

Our supporters were working hard and getting the k’s up themselves as they crossed the city to be there for the team. It was so good to have familiar faces, pink balloons and encouragement from our people.

Every single runner finished, even those with injuries. The medals are the same, but the memories are personal and individual. It was an elating and emotional experience after months of training and sacrifice. Knowing that we were running for those who can’t kept us going and inspired on this adventure.

Our love and thanks go to the Run for Play Team who rose to the triple challenge: train for a marathon, self fund your entry and help us to raise $200,000 for play.

You can check out their pictures from the day in the gallery below.

We’ve almost hit our ambitious fundraising target of $200,000, with $190,000 in donations received. Our team is overwhelmed and honoured by the support. Touched by Olivia does not receive government funding, and provides valuable services to Australian communities for free. This campaign will cover the cost of operations, and allow our organisation to continue to grow in 2017. Thank You.

If you would like to help us to reach our goal, please make a donation here.